Destroying Iraq To Save It. 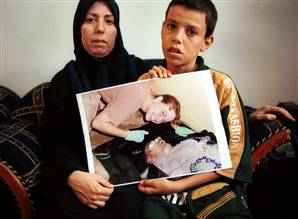 President George Bush Sr. won the first Gulf War, but was stopped at the Iraq border by a fractious coalition---one that was willing to undo the Iraqi incursion into Kuwait, but not to actually overthrow the Iraq regime. We settled for containment and sanctions against Iraq, a policy that severely restricted the Iraqi militarys attempts to rearm, but also impoverished the Iraqi people.

President George Bush Jr. restarted his fathers war, for whatever reason, over the objections of the regional powers and the world community, and overthrew the regime of Saddam Hussein. The rationale for that war now appears to have been flimsy at best. But flimsy rationale or not, the costs of this war are immoral, untenable, and unsustainable.

Over 2,800 American lives have been lost, with over 44,000 casualties.[1] A study by Johns Hopkins suggests that Iraqi deaths attributable to Gulf War II stand at over 645,000.[2] Given that casualties outnumber deaths by several times, and using a 4 to 1 casualty ratio, this suggests that perhaps 10% of the population of Iraq has been either killed or wounded. Furthermore, the Milken Institute Review estimates the total economic cost of the war for the United States will exceed $2 trillion. This is the sum of the current and future budgetary costs along with the economic impact of lives lost, jobs interrupted and oil prices driven higher by political uncertainty in the Middle East.[3]

History never repeats itself, Mark Twain wrote, but it does rhyme. A well-known phrase from the Vietnam conflict was that we destroyed the village to save it. Today we could dust off that phrase and say that we have destroyed the Iraqi state to save it from an Iraqi dictator. Post-conflict Iraq is worse off than under the brutal regime of Saddam Hussein. According to the Johns Hopkins report, the Iraqi death rate, post-conflict, is higher by an additional 130,000 deaths per year, and these mostly women and children.[4]

We have been not only destroying Iraq to save it, but we have handed radical Islam additional evidence that the West is corrupt, is an enemy if Islam, and needs to be destroyed. Pre 9/11 al-Qaeda was between 3,000 and 5,000 members.[5]  But al-Qaeda has never been a traditional organization, and is instead more like a foundation, a brand name, and a rallying cry.[6] Al-Qaeda is like the mythical hydra in this regard: cut off one head and two more grow back in its place. Thus, despite 150,000 troops in Iraq, and despite the $2 trillion direct and indirect costs of the war, al-Qaeda seems to have about the same number of members today, while al-Qaeda aligned and inspired groups are expanding around the globe.[7]

Our war on terror has done more harm than good. We have destroyed one country, dethroned a dictator, and undermined our entire economy in the process. We are being asked to support more of the same, to continue until the job is done, to finish what we started. But at what cost? We are destroying American and Iraqi lives at a furious pace, and we are stealing from our future to support an ill-conceived and perhaps even an illegal war. The American people must put an end to this.

[1] The 44,000 figure is taken from http://icasualties.org/oif/, and is widely quoted. However, in an article written for the Independent (October 9, 2006) and available for download at http://niemanwatchdog.org/index.cfm?fuseaction=background.view&backgroundid=00138, the death to casualty ratio is given as 8 to 1. That equates to the lower estimate of casualties offered by Bilmes and Stiglitz of the Milken Research Institute in a report available at: http://niemanwatchdog.org/index.cfm?fuseaction=background.view&backgroundid=00138). I tend to side with the 44,000 number, as it is backed by real data. That means the casualty ratio is actually 15.8 to 1.

[2] http://www.jhsph.edu/publichealthnews/press_releases/2006/burnham_iraq_2006.html There are questions about the validity of this study, specifically with the less than robust techniques used to obtain the death tolls.