Iceland is a very beautiful country, but a harsh one. One British TV personality described it as like Scotland on steroids. It is a country painted in bold colors. The black lava hillsides are often 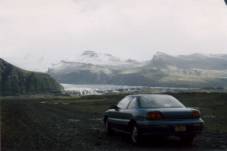 capped with snow dripping down and fields of bright green moss climbing up, each in a vain attempt to claim the hillside for their own. Lava fields have their own stark beauty, but most people avoid them and miss their hidden treasures.

Vatnajokull is the largest glacier in Europe. Actually it is one of the last remaining ice caps from the last Ice Age. It rests on land too low to develop a glacier, but it is so thick it creates its own weather and thereby maintains itself. The yearly snowfall builds up until the pressure causes the ice to flow outward. What you see in this picture is one of the outlet glaciers.

While Iceland has a moist climate, the cool weather and the constant wind combine to make it hard on plants. They bloom quickly, but grow slowly. They stay low to the ground to avoid the wind and unless you get out of your car and walk you are unlikely to ever see them.  (This doesnt apply to the Blue Lupen, a non-native plant imported to stabilize the soil and fix nitrogen. It is taking over and driving out native plants.  Fields of Blue Lupen are quite lovely, though.)  Note the cairns, ancient piles of rock designed to guide people during bad weather. Its bad luck to remove a rock, but good luck to add one---as long as it doesn't fall off. 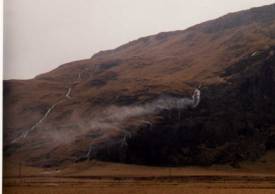 Iceland is a cool country. It never gets really warm, but it never gets really cold either. The average winter temperature is colder in New York city. Unfortunately temperature doesnt tell the whole story. Iceland is the windiest populated place on earth, and the wind chill can be quite severe. (This waterfall is being blown sideways.) Add the winter storms that come in three-day cycles and you have a recipe for a wet, miserable climate. If you let the weather stop you though, youll miss out on much of what Iceland has to offer. (Icelanders say the weather isnt bad until you see whitecaps in the streets.) 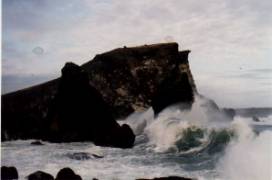 The Reykjanes peninsula juts off the southwest coast of Iceland and into the Atlantic. Another way of looking at it is that the Reykjanes ridge comes ashore. The Reykjanes ridge is where the American and European tectonic plates are moving apart and new land is created to fill in the gap. There is a point on the Reykjanes peninsula where you actually see the different plates, and where you can stand with one foot in the new world and one in the old. The fault created by the plates moving apart is responsible for the high level of geological activity in Iceland. It creates good things like geothermal energy, and bad things like earthquakes and volcanoes.  (This picture is of the cliffs at the very edge of the American plate.  On the other side of the cliffs and across a shallow rift is the European plate.)