In 2003 I was privileged to meet Senore Scalla, one of the old masters still working at the cameo factory.  The cameo factory I visited is located in Ercolano, a small town located south of Naples and on the slopes of Mt. Vesuvius.  I had a brief but memorable discussion with Senore Scalla, a discussion that opened a window on some of the hidden effects of mechanization and globalization. 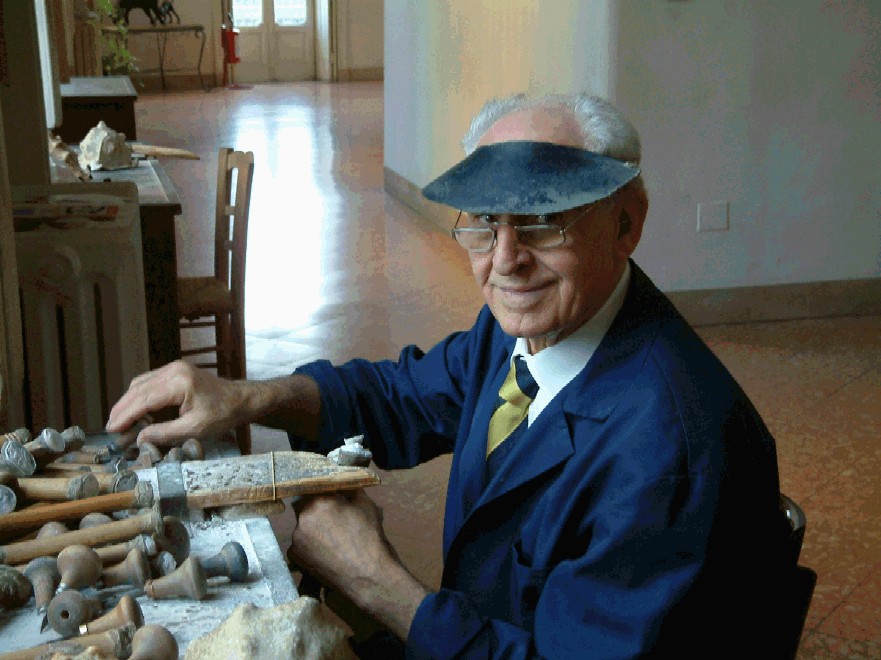 While living in Italy I took several day tours.  Nearly every bus tour stops at the cameo factory, or something like it, where the tourists are given a brief talk about the tradition of Italian hand craftsmanship, then encouraged to browse and buy.  From USENET postings I've gathered that most find this to be the most boring and useless part of their trip.  For example, see this excerpt from a post at rec.travel.europe: "what a waste of time most of the tour was...visiting stupid showrooms--the cameo factory, the furniture factory, the glove factory."  What most people don't realize is they are viewing living history; they are witnessing the last of the fine Italian hand-crafted tradition.

With modern mechanization, it is possible to make things---gloves, shoes, pottery, cameos---more quickly and more cheaply than with human labor.  What human labor is required can be provided more economically in third world countries than in the western world.  More and more, what you see for sale in the Italian shops are items that were produced elsewhere.  Usually these are the smaller, less expensive items, the type of things a budget-conscious tourist would be likely to buy.  In other words, knick-knacks. 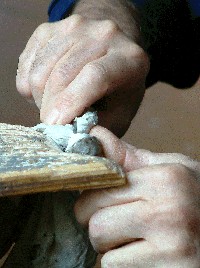 Increasingly, however, the economics of globalization are eliminating the master craftsman.  The older masters are dying off, and the younger generation has figured out they can get paid the same amount for less demanding work.  Make no mistake, carving cameos is hard, grueling labor and places great demands on the hands and body.  Senore Scalla's hands no longer appeared normal.  They have been deformed from the years of work.  His fingers are flattened and thickened, and in the palm of his carving hand is a great mound of callous growing from his palm.  The younger generation looks at what hand-crafting cameos does to the body and decides, rightly or not, that as long as the pay is the same they'd rather do something else.  And so when Senore Scalla and his ilk die, an Italian tradition, (and perhaps an industry,) dies with them. 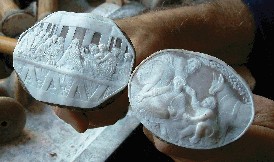 Cameos are carved from pieces of conch and other large, thick shells.  As they carve, the different layers of the shell are exposed.  Since the material is organic, no two pieces of shell are alike.  Thus no two hand-carved cameos are ever exactly alike.  While the subject matter and even the look of the pieces may be similar, the creativity of the craftsman and the adaptation of the carving to the nature of the material ensure that each piece is unique.

Once the basic cameo is finished, it is fastened to a base, often a base made from semi-precious stones.  Then the cameo is set in either silver or gold, depending on the quality of the workmanship.  One made by the old masters is set in gold; one made by less talented craftsmen is set in silver.  If the setting and the base allow it, the master craftsman may carve his initials into the back of the piece.

With mechanization and synthetic materials, cameos can be churned out, each one exactly like the one before it.  Since each one is exactly the same, settings and sized can be standardized and mechanized.  Factories can be set up in third world countries where the labor is cheap.  The market can be flooded with cheap knockoffs and the consumer, who has been conditioned to buy based on price rather than quality, has lost the ability to spot the difference.

While I have concentrated on describing cameo production, the same could be said for other Italian handicrafts such as ceramics, leather goods and inlaid wood.  The modern hand-painted ceramics, say the old men, don't have the quality or detail of the old pieces.  Neither do the inlaid wood pieces made today.  You can see it for yourself simply by comparing old against new in the same shop.  Shortcuts are taken, even when creating reproductions, shortcuts that are clearly visible when the two are compared side by side.  Italians are renowned for their fine, hand-crafted leather work.  I own several pair of moderately expensive Italian shoes, and although the leather is top rate, the craftsmanship is obviously inferior.

So when you go to Italy, don't sneer at visiting the shops and meeting men like Senore Scalla.  You are seeing something that is increasingly rare in today's homogenized, sanitized, and globalized world.  You are a witness to history, to something that in our lifetime may only be viewed in museums, documentaries, and theme parks.